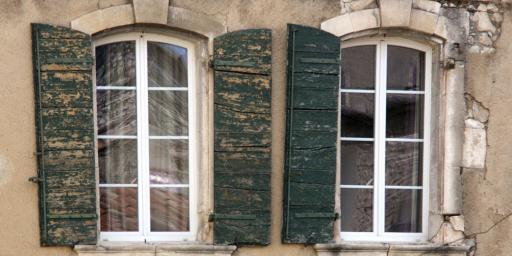 I love Mary Stewart’s romantic suspense novels: their sense of adventure and intriguing storylines, their strong-willed heroines, and most of all, their transporting settings. Her first, published in 1955, was Madam, Will You Talk?.

The narrative takes place around 1950, in a hot, dusty Provence where Roman ruins and stony, abandoned villages dominate the landscape. The Second World War still casts a shadow over the life of young widow Charity Selborne, whose husband lost his life flying RAF operations. On a summer motoring holiday through France with a friend and fellow teacher, Charity arrives at a small hotel in Avignon. Through Stewart’s lyrical descriptive prose, we feel her release and excitement at being in the balmy warmth of the south.

‘It was dusk when I set out, and the street was vividly lit. All the cafés were full, and I picked my way between the tables on the pavement, while there grew in me that slow sense of exhilaration which one inevitably gets in a Southern town after dark.’

‘Presently, round a curve in the city wall, the old bridge of the song came into view, its four remaining arches soaring out across the green water to break off, as it were, in mid-leap, suspended halfway across the Rhône. Down into the deep jade water glimmered the drowned-gold reflection of the chapel of St-Nicholas, which guards the second arch.’

At the hotel, Charity strikes up an acquaintance with a lonely thirteen-year-old English boy called David. His stepmother has brought him to the South of France to protect him after his father, Richard Byron, was acquitted of murder. Rumours persist that he is guilty, and they have reason to believe that Byron is now pursuing them.

Charity steps up to offer David a diverting trip to Nȋmes in her sporty convertible Riley roadster and the scene is set for a fast-paced adventure in which the foreshadowing of danger is woven into the spirit of place. They stop at the Pont du Gard:

‘Whenever I look back now on the strange and terrifying events of that holiday in Southern France, I am conscious of two things which seem to dominate the picture. One is the continuous dry and nerve-rasping noise of the cicadas, invisible in the parched trees, the other is the Roman aqueduct over the Gardon as I first saw it that brilliant day.’ 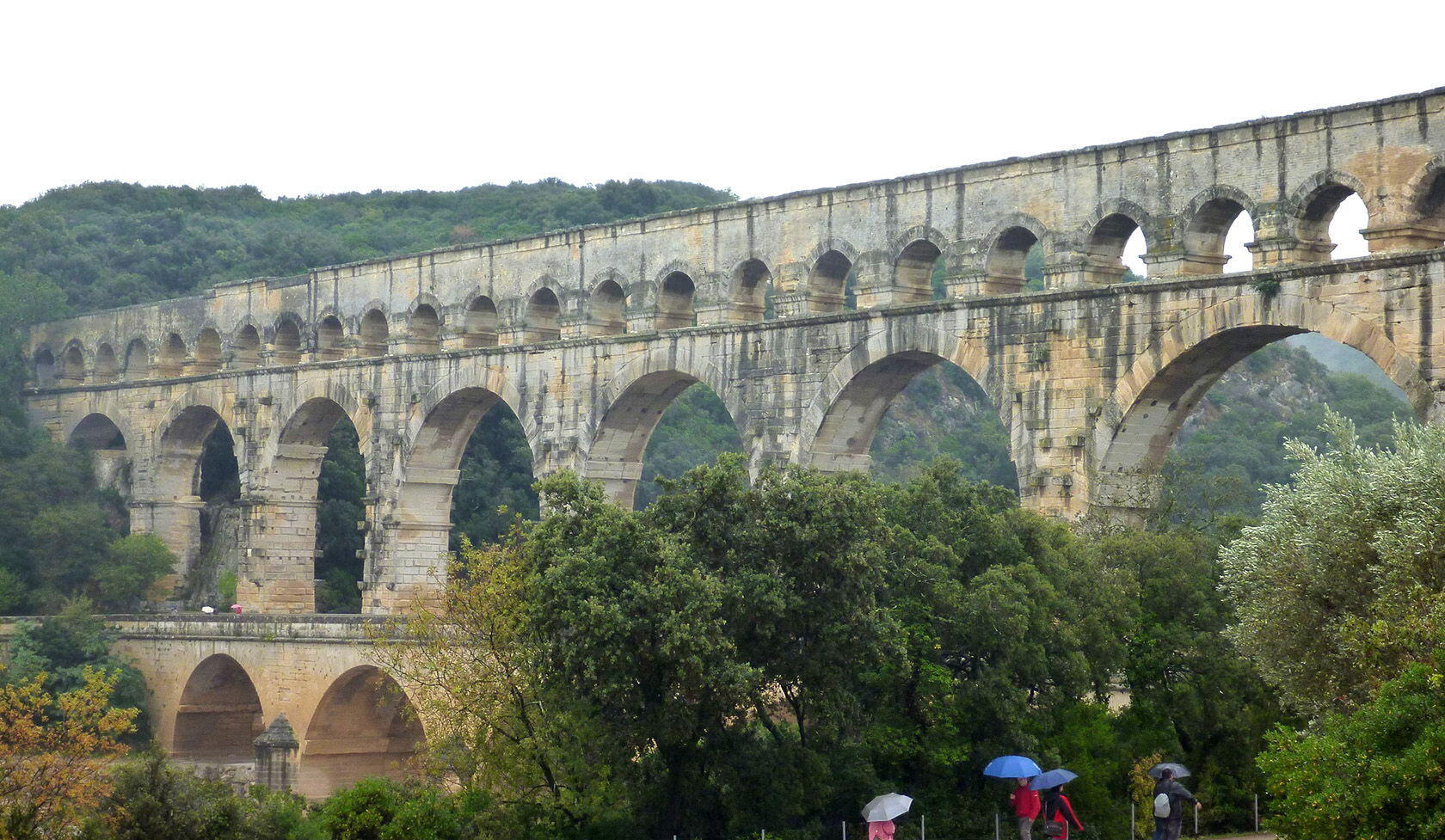 At Nȋmes, Stewart evokes the ‘massive and terrible arches’ of the Roman arena, as David is suddenly sure that he has caught sight of his father there. A man ‘who was probably a murderer, a man vindictive and dangerous’. 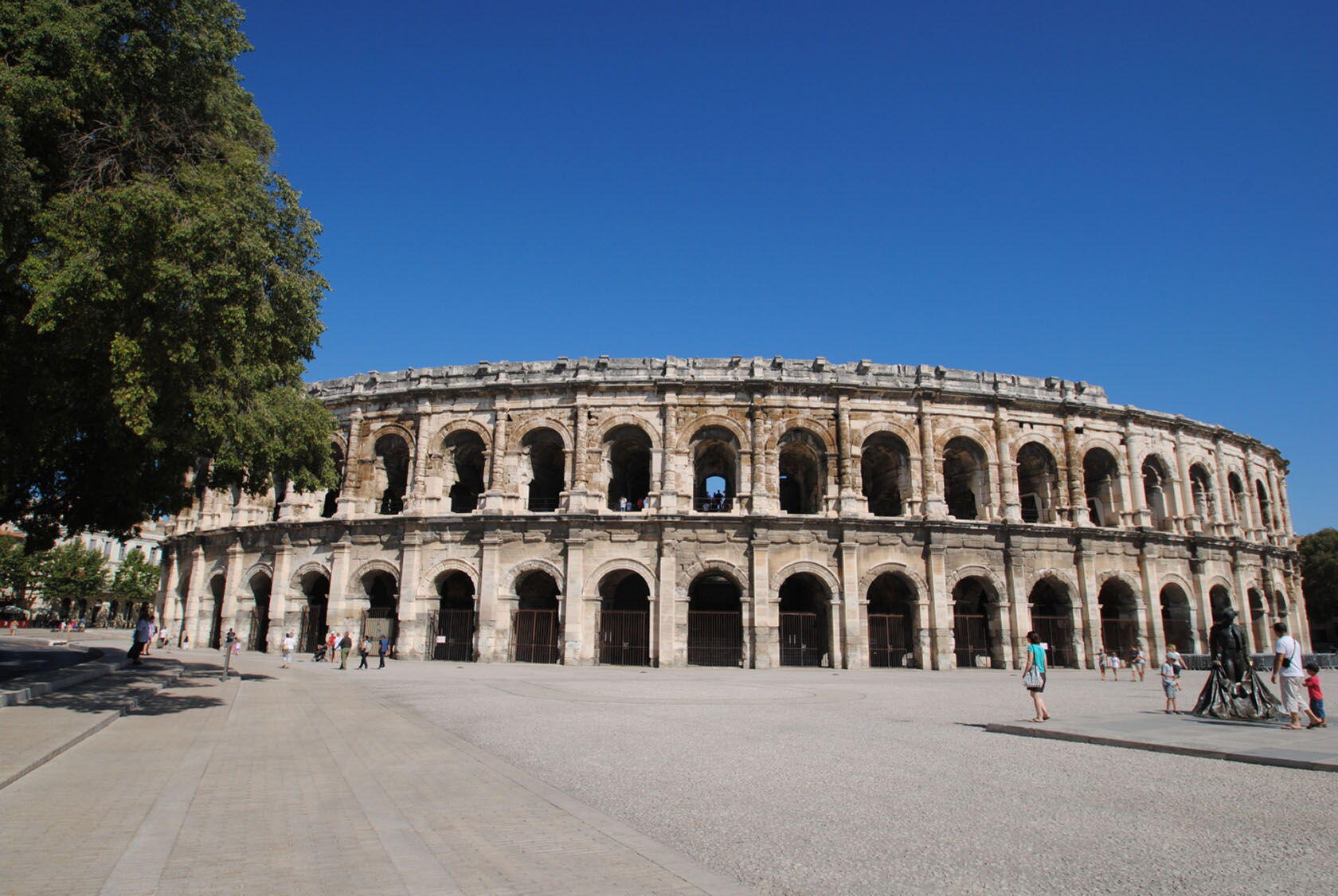 I first read this novel a long time before I came to live in Provence for several months of the year. When I picked it up to re-read this summer, all I could remember was how much I had enjoyed it and a general impression of car chases around the countryside.

But this time I was gripped not only by the story but by the beguiling descriptions of the locations. Some were unchanged, simply seen through the eyes and mindset of a different time; others offered a glimpse into the changes wrought in seventy years, as at Les Baux, now much restored:

‘The deserted town of Les Baux, in medieval times a strong and terrible fortress, stands high over the southern plains. The streets of eyeless houses – little more than broken shells – the crumbling lines of the once-mighty bastions, the occasional jewel of a carved Renaissance window, clothed with ferns, have an uncanny beauty of their own.’

It’s in the casual details, though, that the changes are most striking. On the roads to Cavaillon, Tarascon and Salon – and in the towns themselves – there are still mule carts and horse-drawn delivery vehicles. Level crossings to allow trains to pass are hand-operated and can hold up the traffic for twenty minutes or more. Outside the towns, all is scrubby, stony ground interspersed with olive groves and windbreaks of cypress: an empty landscape. Nȋmes is described as sitting in the sparsely populated countryside where it would be easy to commit murder.

The sense of a bygone age persists in the attitudes and customs of the characters. Cigarette smoking is a constant, as is copious drinking, often followed by driving. As with any vintage novel, throwaway comments reveal the attitudes of their day. In a Mary Stewart novel, it all adds up to a rich immersion into a specific place and time. 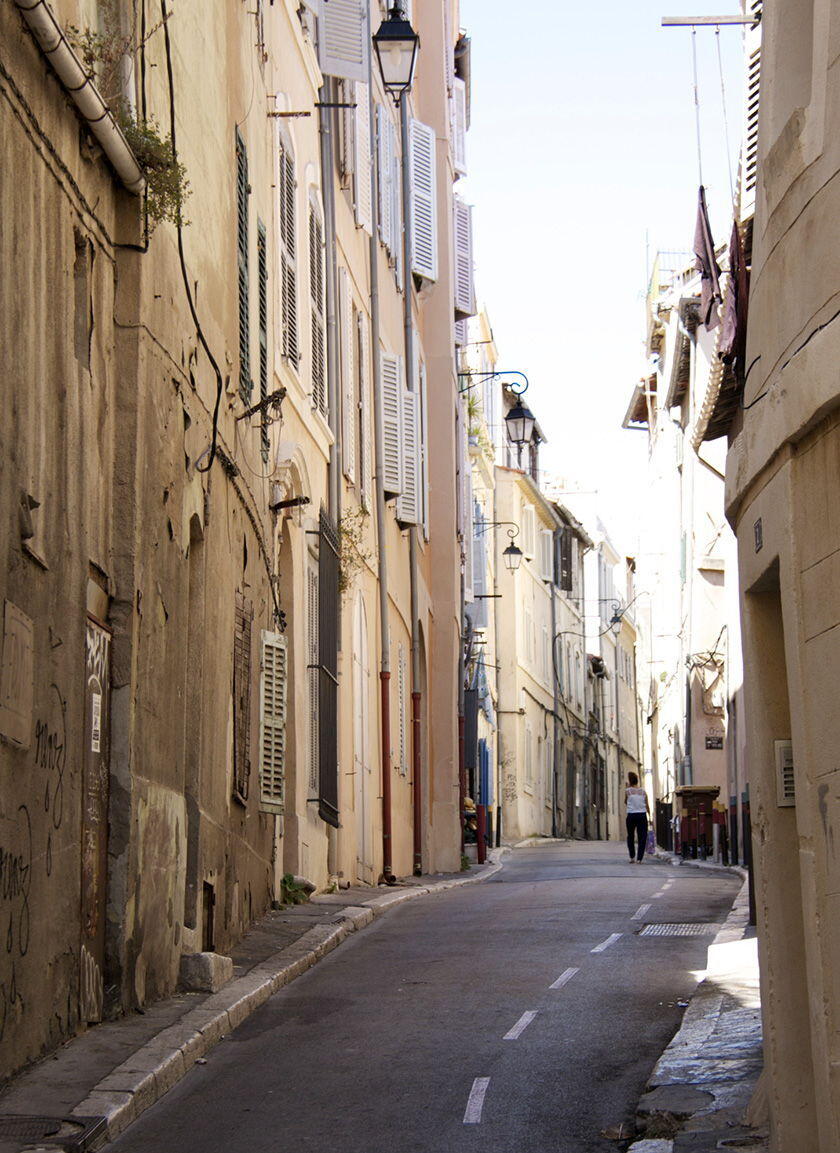 In Marseille, she writes of ‘streets of tattered houses and little grubby shops, where the plaster and the paint hangs in peeling festoons, and where beautiful ragged children and mongrel dogs play together among the refuse of the gutters.’ (…) ‘We went out into the dark streets that ray from the Old Port and turned, instinctively and as if by mutual consent, towards the sea. Presently we found ourselves in a cobbled street which slanted along the seafront, with tall houses to the left of us, and a low sea-wall to the right. (…) The houses were dark and secret, and the occasional lamps cast only a furtive light on the cobbles.’

By now a tentative romance has kindled. Despite a suspenseful and fast-paced sequence of life-threatening events, the road to Toulon is lushly conjured and timeless. ‘The Mediterranean night-wind, pine-scented, sea-scented, sang past my cheek in a warm dark tide.’ 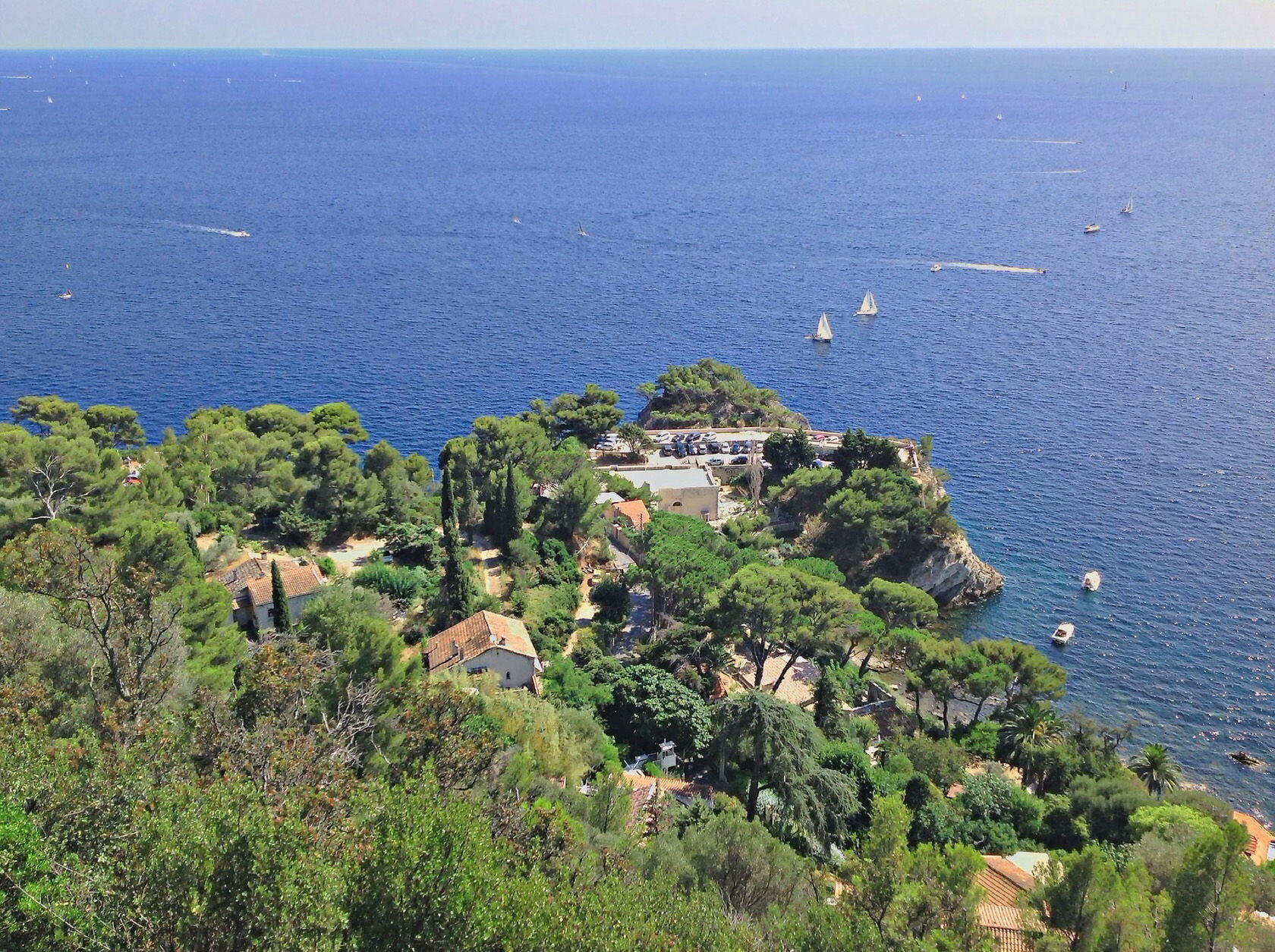 The book ends on a high note that the reader is left to imagine – the next destination for the characters will be the island of Porquerolles, with its white sands and turquoise sea. Armchair travel at its finest, this is a novel that intrigues even more than when it was written. 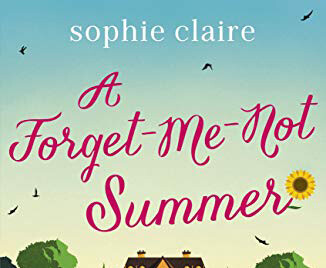 Provence is the Perfect Setting for Sophie Claire Novels

How to Bring French Culture into Your Life Virtually 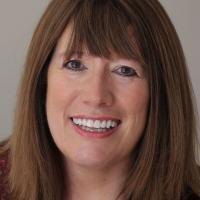