Take a Walking Tour the Fountains of Aix-en-Provence 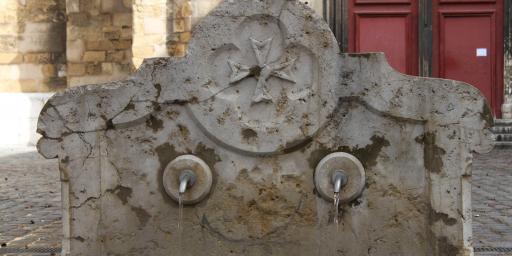 Aix-en-Provence is known as the City of Water. Settled in 122 BC by the Romans who found natural springs, they called the city Aquae Sextiae after one of their important consuls Sextius Calvinus. The “Waters of Sextius” provided the population with water (both hot and cold) for daily life, animal husbandry and thermal baths. On the site of these Roman baths, is a commercial spa called Thermes Sextius. 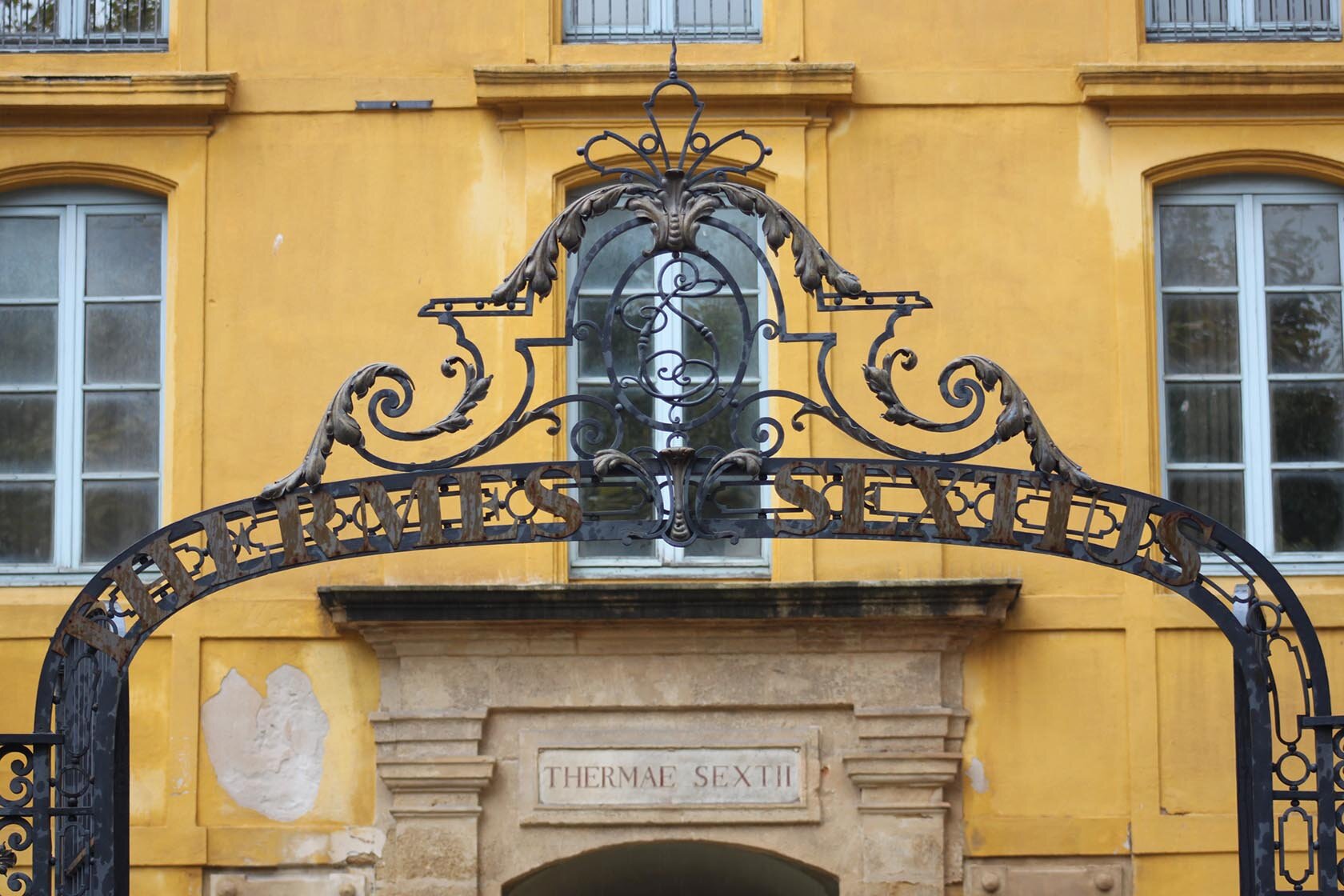 As the town grew in size and importance, water sources were critical to sustaining the population in their everyday activities. Aix-en-Provence was not officially part of France until 1481. By 1555, the town had become a pivotal administrative capital of the French Kingdom. Throughout the old centre and the chic Quartier Mazarin, decorative fountains dot the streets. During the Renaissance, the 30+ fountains you see today were embellished with ornate elements.

Don’t drink the water from the fountains. Although, it is not uncommon to see a dog taking a quick dip on a summer day.

Aix Walking Tour of the Fountains

Discover the fountains of Aix-en-Provence as you walk the streets of the old town. The following list is not exhaustive. However, if you follow the order, it is a walking loop. Begin at La Rotonde, near the Tourist Office, walk through the Medieval town and the Quartier Mazarin back to the starting point. 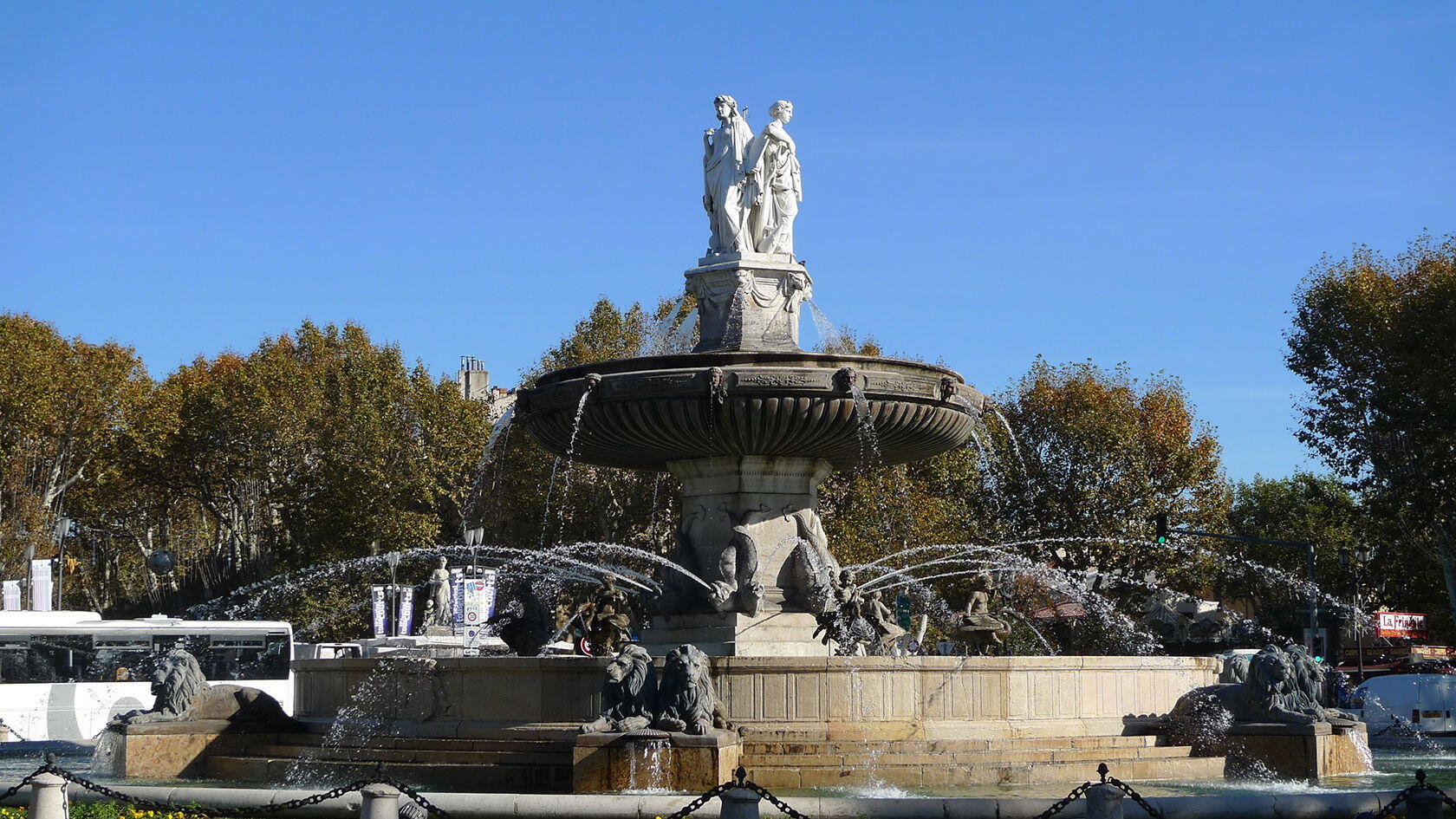 Although, not technically at the geographic centre of Aix-en-Provence, the sizeable circular fountain – La Rotonde – separates the old sections from the contemporary part of the city. This magnificent fountain represents the art and glory of Aix. Constructed in 1860, La Rotonde marked the entrance to the town at that time. Also known as the Three Graces, the fountain is one of the most recognizable and photographed sights in the city of Aix. Now that the city has finished its construction work near the fountain, you can even take a photo of La Rotonde without risking your life. 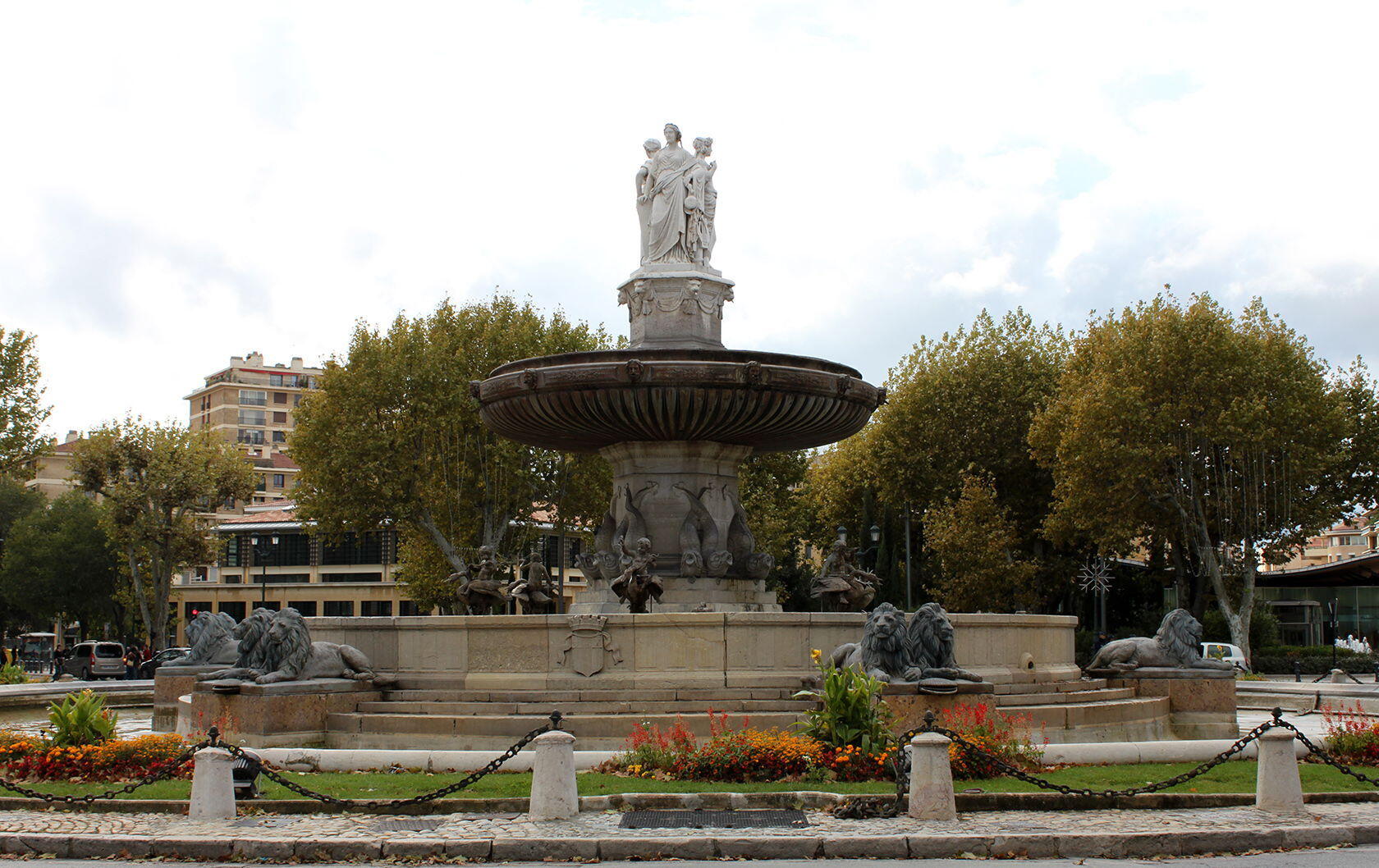 One of the most impressive things about this fountain is the 32-metre basin. This structure is decorated with marble statues symbolizing the principal cities of Provence: Aix, Avignon, and Marseille. The figure facing the Cours Mirabeau and the Courthouses is named Justice. The one to the right of that towards Marseille is called Agriculture. The remaining statue, which faces Avignon, is called Fine Arts. The other figures (lions and cupids) decorating the fountain represent the main activities of this city and region.

This fountain sits in the centre of Place des Augustins, a busy plaza surrounded by restaurants with terraces. The plaza, popular with students, has a lively din at all hours of the day. The square is crowded to the point that the Fontaine des Augustins seems like more of a bottleneck than a monument that received historic classification in 1949. The original fountain constructed in 1620 was restored in 1820. It’s believed that the column at the centre of the basin came from a Roman structure. Fontaine des Augustins once served a practical purpose, supplying water to steam locomotives at the Aix train station. 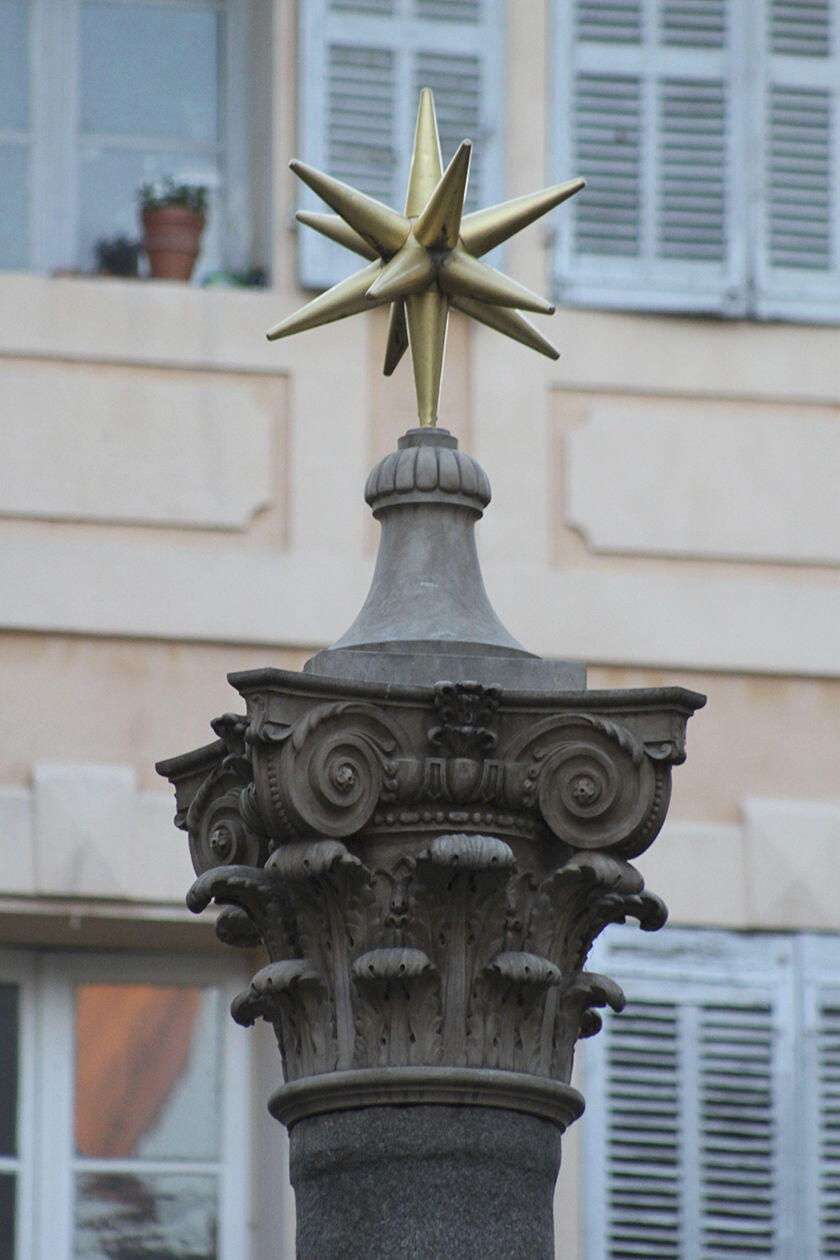 This cobblestoned plaza, a national monument since 2000, takes its name from the Albertas family from Alba, Italy. Members of the family were influential in Aix-en-Provence politics and involved in the local parliament. Jean Baptiste d’Albertas was President of the Audit Office known in France as the la Cours des Comtes. 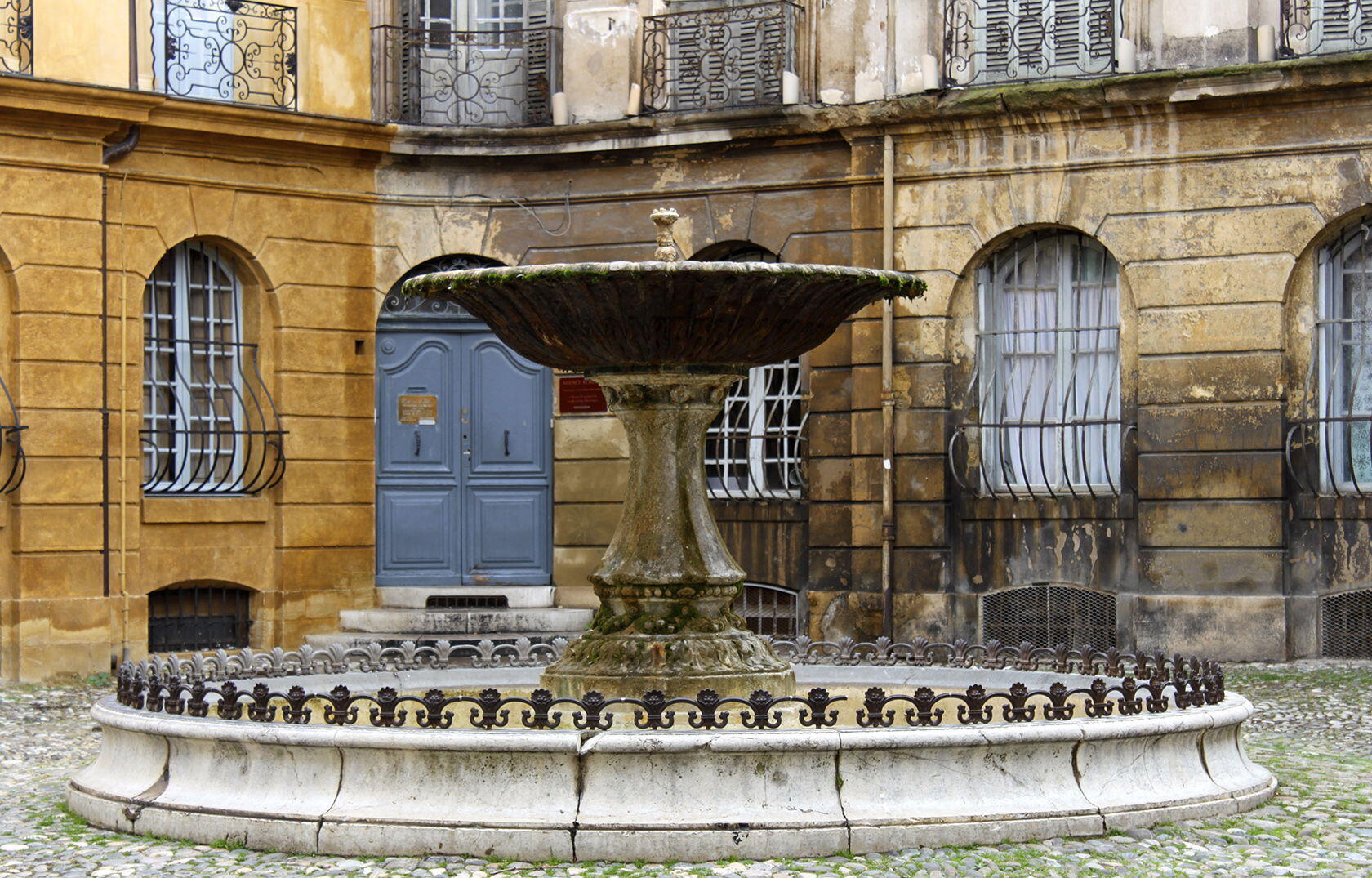 The Albertas family owned a house at 10 Rue Espariat, the street that now borders the square. In 1745, Jean Baptiste d’Albertas having redone the façade of his house envisioned a different view – a beautiful square with Italian flair. The Marquis d’Albertas bought the buildings around the square and had them demolished. Over the next twenty years, the houses were rebuilt in a baroque style and sold to prominent Aix residents. The Albertas family set guidelines for the building owners to maintain the facades and visual appeal of the square. The Place d’Albertas has been compared to other royal squares including the Place Vendôme in Paris.

The original Fontaine d’Albertas, installed in 1862, no longer worked by 1911. The fountain was dismantled and transported to the École d’Arts et Métiers. The students created a replica (that you see today) in appreciation for the additional land the city donated to the school, in 1912.

In a small enclave called La Place aux Herbes, there is a fountain decorated with a wild boar. From 1360 this was the location of Aix’s original fish and vegetable market. Bordering this section of the Place Richelme is the Café Thé Richelme (one of the best coffee shops in Aix), and the chain restaurant Le Pain Quotidien. The fountain gets a little lost in all the activity.

The central plaza, Place Richelme is shaded by plane trees (platanes), is a paradise for market lovers. Every day of the week, there is a fruit and vegetable market in this lovely space where the locals’ shop.

The fountain in front of the Hôtel de Ville known as the Four Seasons was listed as a historical monument in 1905. Constructed in 1756, the base designed by George Vallon is a polygon with decorative elements sculpted by Jean-Pancrace Chastel. The central column dates from the Roman era recuperated from ruins and reused for the sculpture, recently restored this fountain almost sparkles.

(Photo was taken before the clean-up) 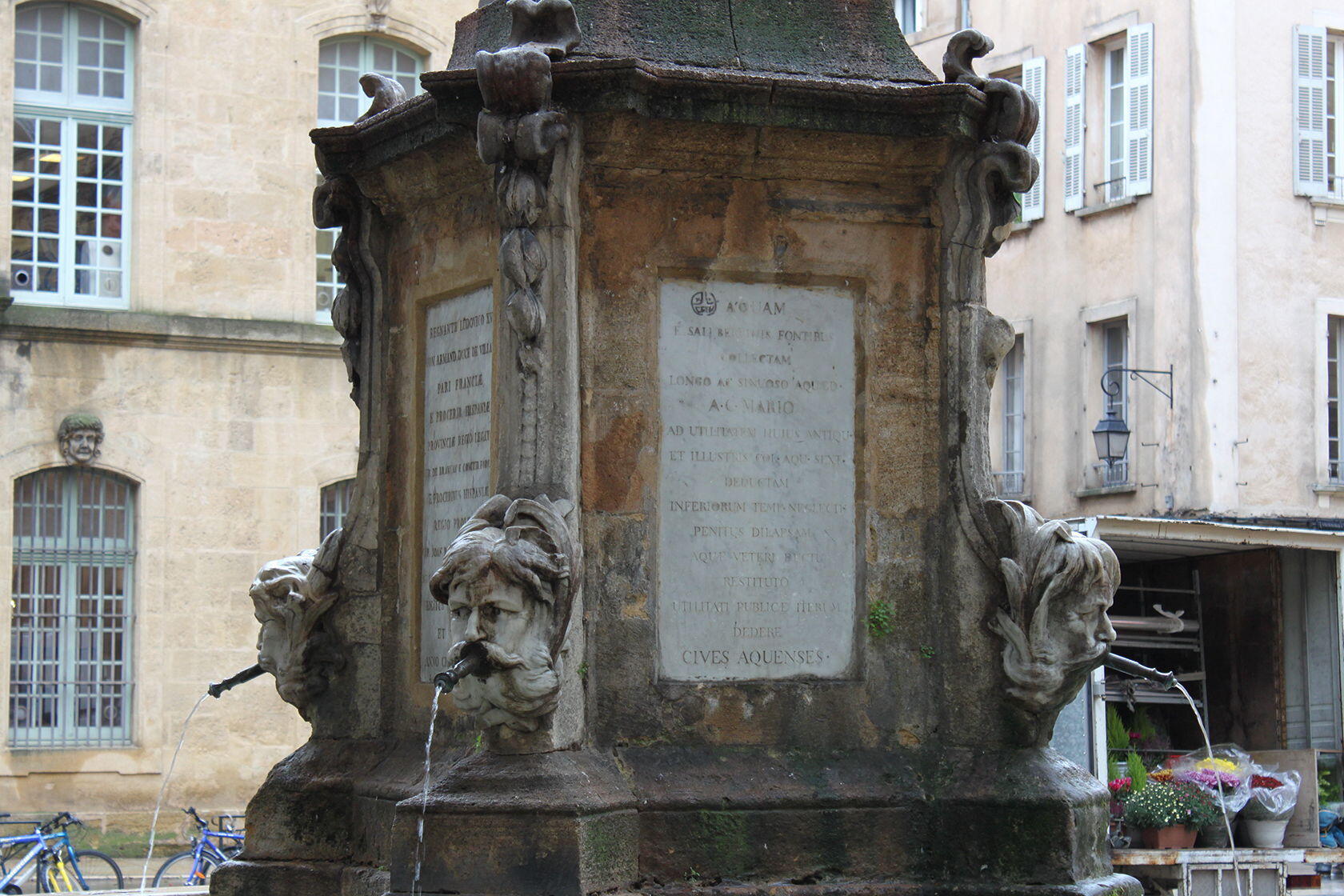 The Hôtel de Ville square is beautiful, but it is also highly relevant to town life. If you enter the square on a Tuesday, Thursday, or Saturday morning, you will be greeted with the riot of colour of the flower market. The rest of the time, café tables creep into the centre so clients can enjoy the shade of the mature plane trees.

Head back through Place Richeleme and turn left on Rue Chabrier to Place des Trois Ormeaux.

Place des Trois Ormeaux is a particularly attractive, shaded square, intersected by three minor roads. You may want to sit here for a while to rest and have a coffee or a light lunch. Take a walk around the charming octagonal shape fountain that is crowned by a cluster of grapes. Like many of the fountains of Aix, this one is made of white calissanne stone. Quiet as this place is today, there is some unpleasantness underneath the calm surface. In 1524, it was the site of the hanging of Honoré de Puget, Lord of the town of Prats. 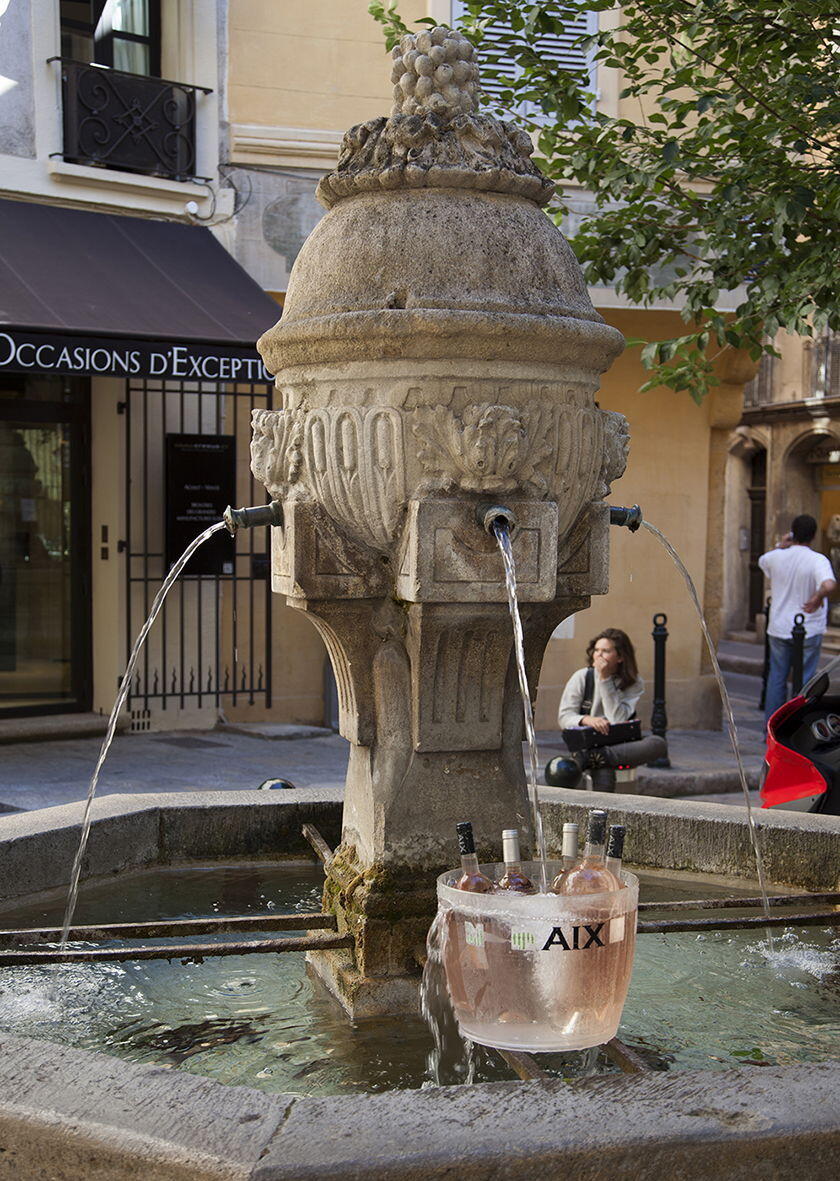 The Place des Prêcheurs is one of the largest squares in Aix-en-Provence, and the central location for the market on Tuesday, Thursday and Saturday mornings. The fountain in between Place des Prêcheurs and Place de la Madeleine, was designed by Jean-Pancrace Chastel and constructed in 1758. Fontaine de Prêcheurs is a large fountain with four lions supporting an obelisk. The obelisk made of calissanne stone is decorated with large medallions (subsequently destroyed and restored) representing key area figures including, Sextius Calvinus, and Louis XV. At the top of the column is an eagle with a globe in its claws.

With your back to Fontaine, de Prêcheurs stroll through Passage Agard to the Cours Mirabeau.

The Cours Mirabeau, Aix-en-Provence’s Champs-Élysées, continues its evolution. In many ways, this street is the heart of Aix. The French word cours comes from the Italian “corso,” meaning promenade. In 1651, Archbishop Mazarin used the stones from the old ramparts as the base for a new street – now the famed Cours Mirabeau. The central road, which divides the old town into two sections, was once reserved for the exclusive use of the aristocracy. Now we can all enjoy walking along the wide sidewalks, beneath the beautiful canopy created by the remaining plane trees. The original trees along the Cours were elms, but the plane tree replaced them. Sadly many have not survived.

The Cours Mirabeau is one of the most popular and lively places in town. Originally there were no shops on the street, only the residences of the wealthy. Today, both sides are lined, not just with elegant houses, but also shops and banks. The side of the road that benefits from longer hours of direct sunshine is where you find the cafés and restaurants. 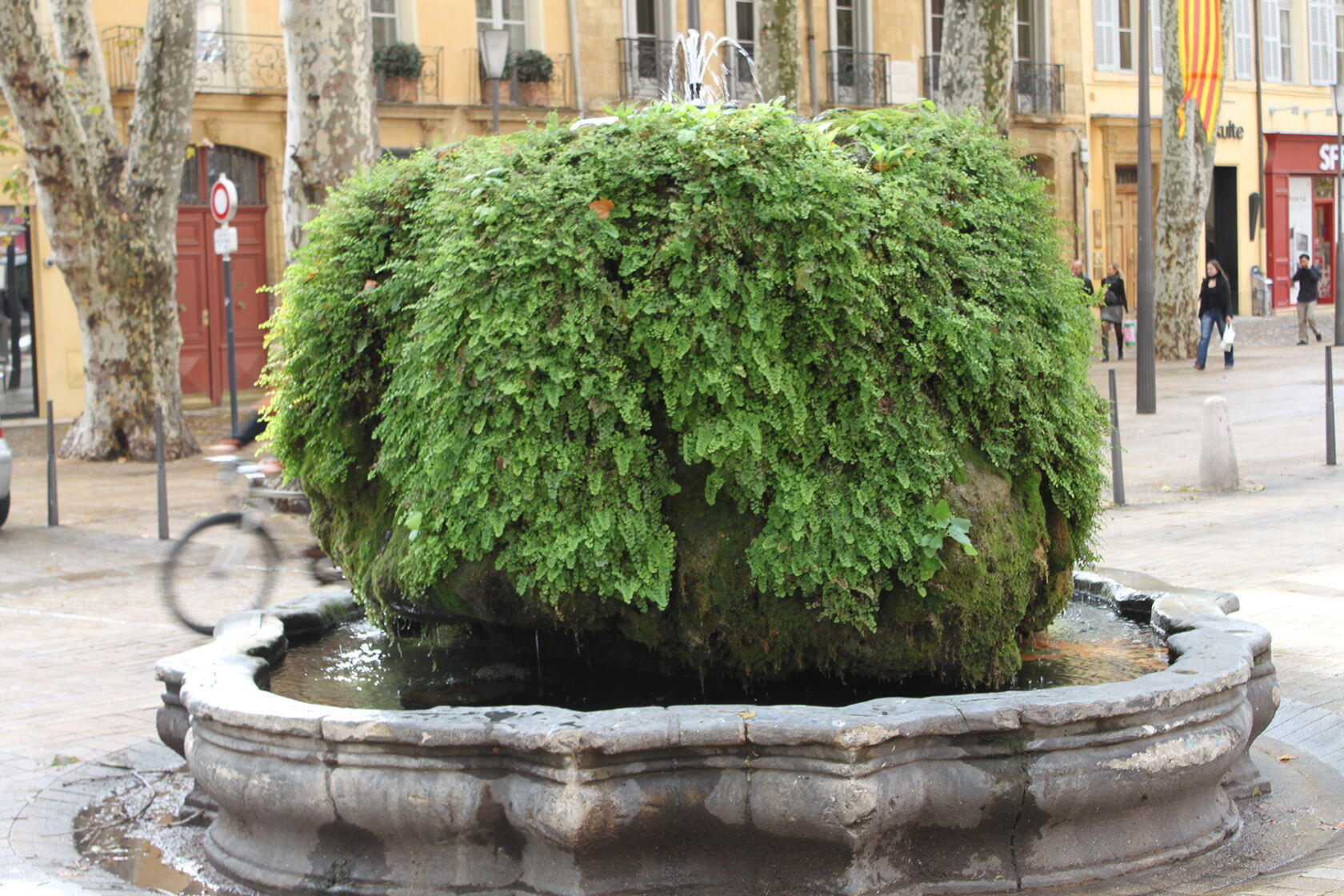 Rooted in the streetscape of the Cours Mirabeau are two moss-covered fountains. Built in 1666, the “mossy” fountain – Fontaine moussue – designed by Jacques Fossé originally had ornate decorative elements. Today, it looks more like a block of stone covered in moss. Ten years after construction, this fountain received thermal water diverted from the Bagniers source. Legend (or fact) has it that local homemakers were banned from using water from this fountain for washing clothes. 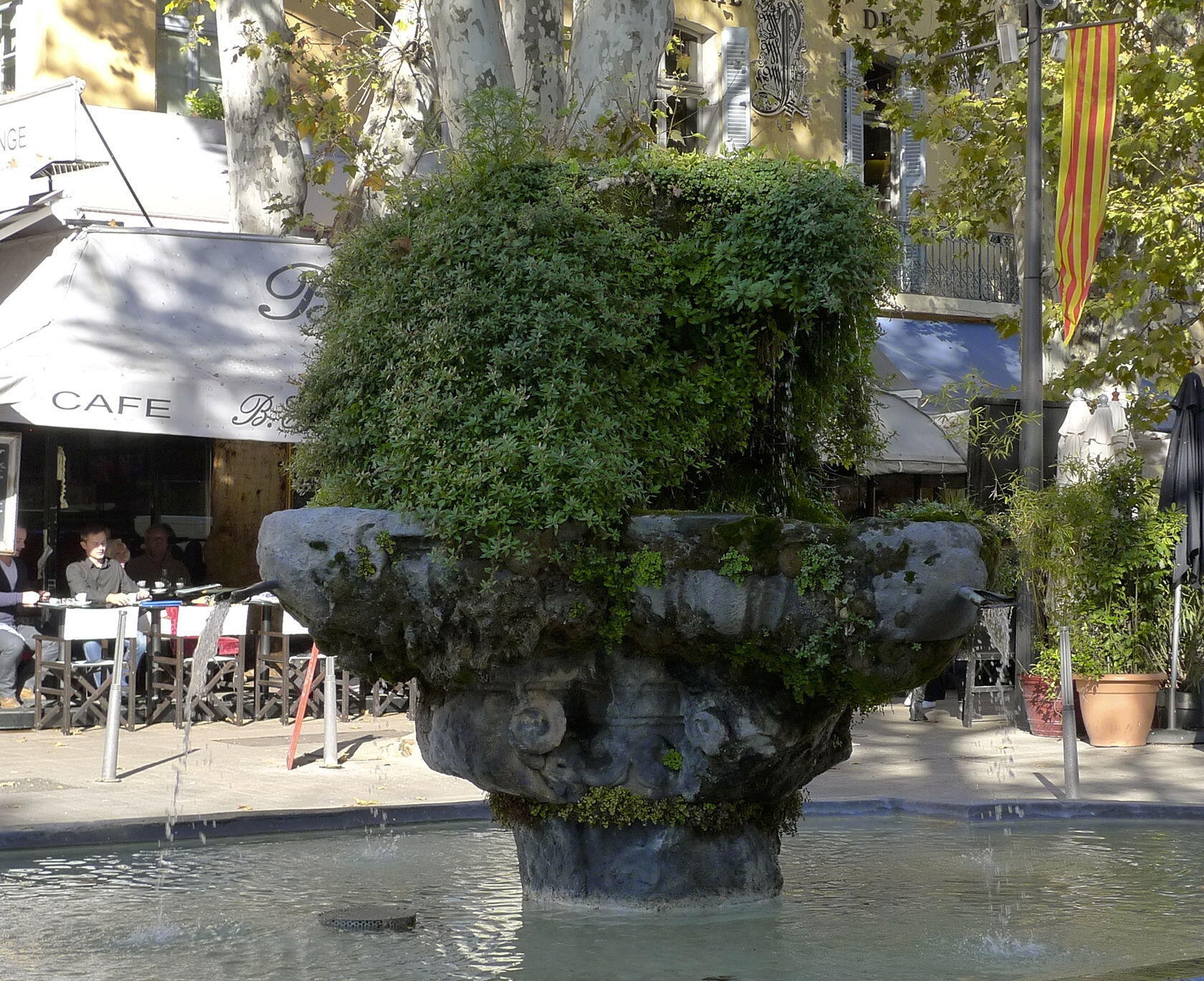 The Fontaine des Neuf Canons was intentionally built, in 1651, low to the ground to provide water for sheep making their way from Arles to the Alps. It is midway up the Cours at the junction of rue Joseph-Cabassol. One of the last fountains in Aix used for domestic purposes the Fountain of the Nine Canons was registered as a historic monument in 1929.

This fountain in Place des Quatres Dauphins was constructed in the mid-17th century in the heart of the Quartier Mazarin. In 1646, Michel Mazarin, then the Archbishop of Aix received the royal orders to proceed with the expansion of the city. Italian architecture influenced an urban plan with broader roads laid out in a grid pattern. 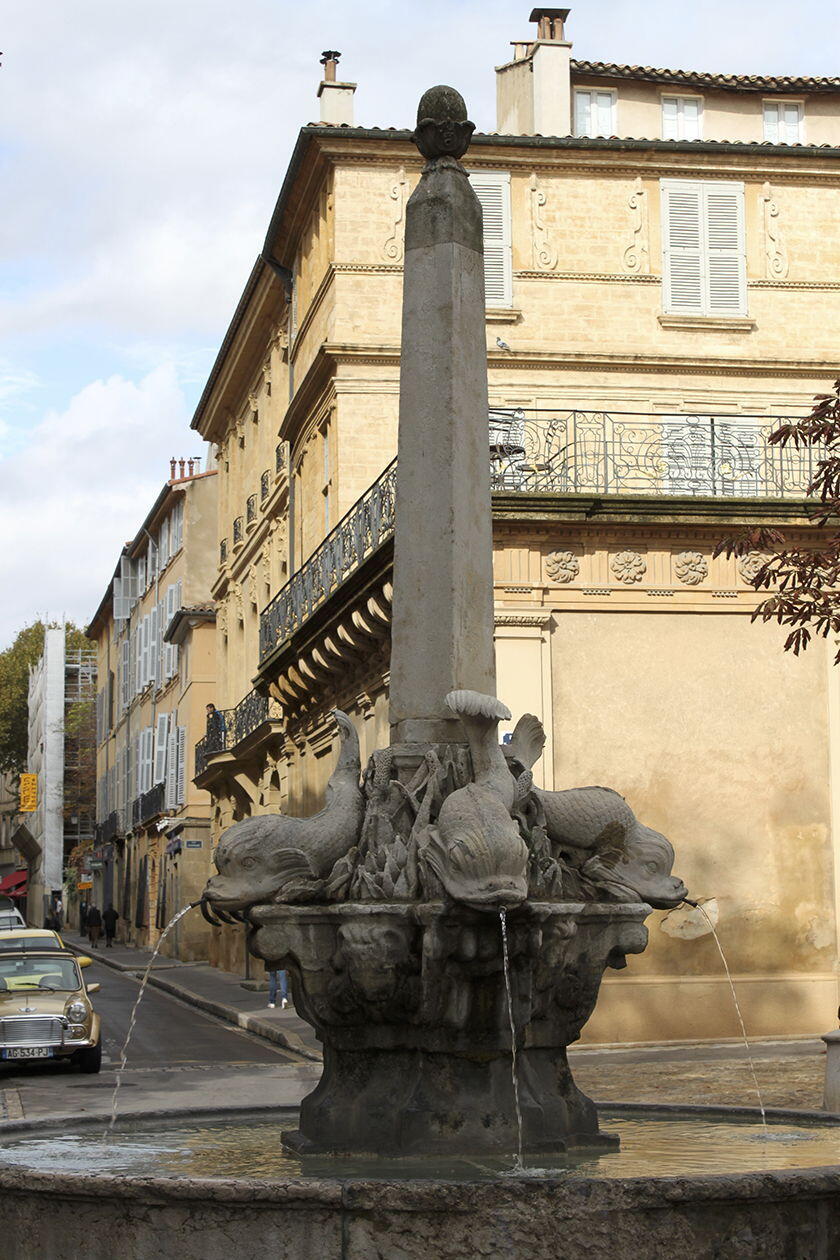 Many of the buildings are residences. Although a few have converted into hotels, restaurants, and retail stores. Take your time to wander through this area; it is compared to the chic residential Marais district in Paris.