Provence is famous for many things. It’s a hotbed of culture, with many notable painters from the region, or living there for a while. The list includes Vincent van Gogh, who lived in Provence from early 1888 to the Spring of 1890, and Pablo Picasso, who spent each summer on the French Riviera for 20 years before moving there permanently in 1946.

This part of France is also home to many contemporary forms of entertainment. It has a rich history of involvement in cinema, with one of the first-ever motion pictures filmed at the train station in La Ciotat. It continues to be featured in many French films like Swimming Pool, Jean De Florette, and Let’s Talk About the Rain.

The region has plenty of museums, including Musée Départemental des Merveilles, Musée Granet XXe, and Musée des Troupes de Marine (in Frégus). You’ll also find plenty of wineries, beaches and casinos, although the latter faces a lot of competition from online operators that offer deposit bonuses to attract new customers.

Sport is another strong asset of Provence, with Ligue 1 team Nice having won the top-flight title four times and the Coupe de France on three occasions, and Marseille, who have won both Ligue 1 and Coupe de France 10 times. Marseille is also the only French club to win the UEFA Champions League.

When it comes to friendly competition, Provence is known for one sport in particular – pétanque, a form of boules. Similar to Italy’s bocce, pétanque requires players to move their balls towards a target called a cochonnet or bouchon that tossed at the start of the game. The winner of the game is then the player that gets their ball closest to the target.

The game started sometime between 1907 and 1910 in La Ciotat, although other variations of boules have existed since the Middle Ages.

Additional reading: Pétanque the Story of Gaining Admission into a Circle of Trust in Provence.

Pétanque is typically played in teams, although some people choose to play it alone, with players each having two or three metal balls.

For more details on the rules of pétanque, please read – Understanding Boules: Why The Game of Pétanque is Like Religion in Provence. 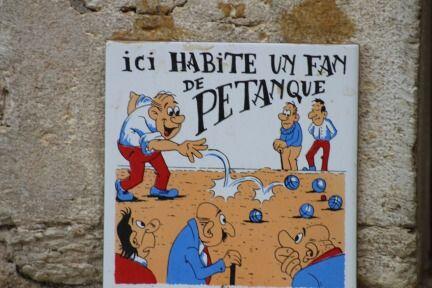 Pétanque is a game enjoyed in official competitions and as a leisure activity. The biggest and most prestigious international tournament is Mondial la Marseillaise à Pétanque, which takes place each July in Marseille. Over 10,000 people take part in the competition, with more than 150,000 spectators. The big games from the tournament even air on French TV.

The game is not exclusive to France. The US holds an annual tournament called the Pétanque Amelia Island Open every November on Amelia Island in Florida.

Souvenirs to Take Home from Provence

Summer in Provence an Evening of Moules and Boules

Understanding Boules: Why The Game of Pétanque is Like Religion in Provence