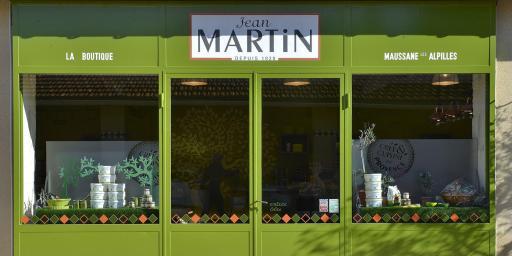 It has been almost 100-years since Jean Martin founded his company in the village of Maussane. In 1920, this town on the southern flank of the Alpilles range had a population of just over 1200 people. When M. Martin senior launched his business of preserving and selling the local olives grown in Les Baux de Provence, Maussane would have been heavily agriculturally focused. Disaster struck in 1956 when a deep frost damaged all the olive stock in Provence. The Jean Martin company and many others dependent on the olive harvest suffered terrible financial losses. 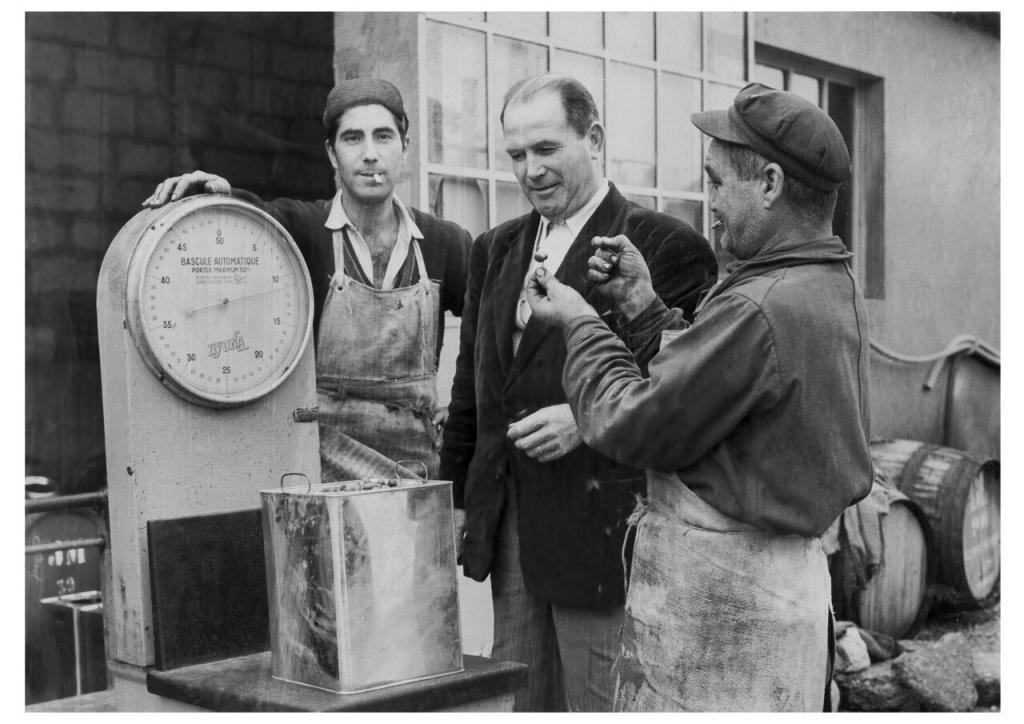 Today Maussane’s population has grown to over 2,100 and the local economy has diversified into tourism, wine production and real estate. On a sunny day, restaurant tables on Maussane’s Place Joseph Laugier de Monblan are brimming with clientele. This plaza is THE place to have lunch or a drink al fresco in the checkerboard shade from towering plane trees and oversized sun-umbrellas. Maussane is bursting with restaurants, upscale food boutiques and several boulangeries. It is impossible to go hungry in this town.

Almost a century later, the Jean Martin business is operated by the founder’s two grandsons Bernard and Jean-Louis. They continue the tradition of producing “high-quality olive and vegetable-based natural products.” In 1978, the brothers assumed the business responsibilities from their father Gabriel and uncle Jean-Pierre Martin and have since then greatly expanded the range of products and company’s footprint in the region. 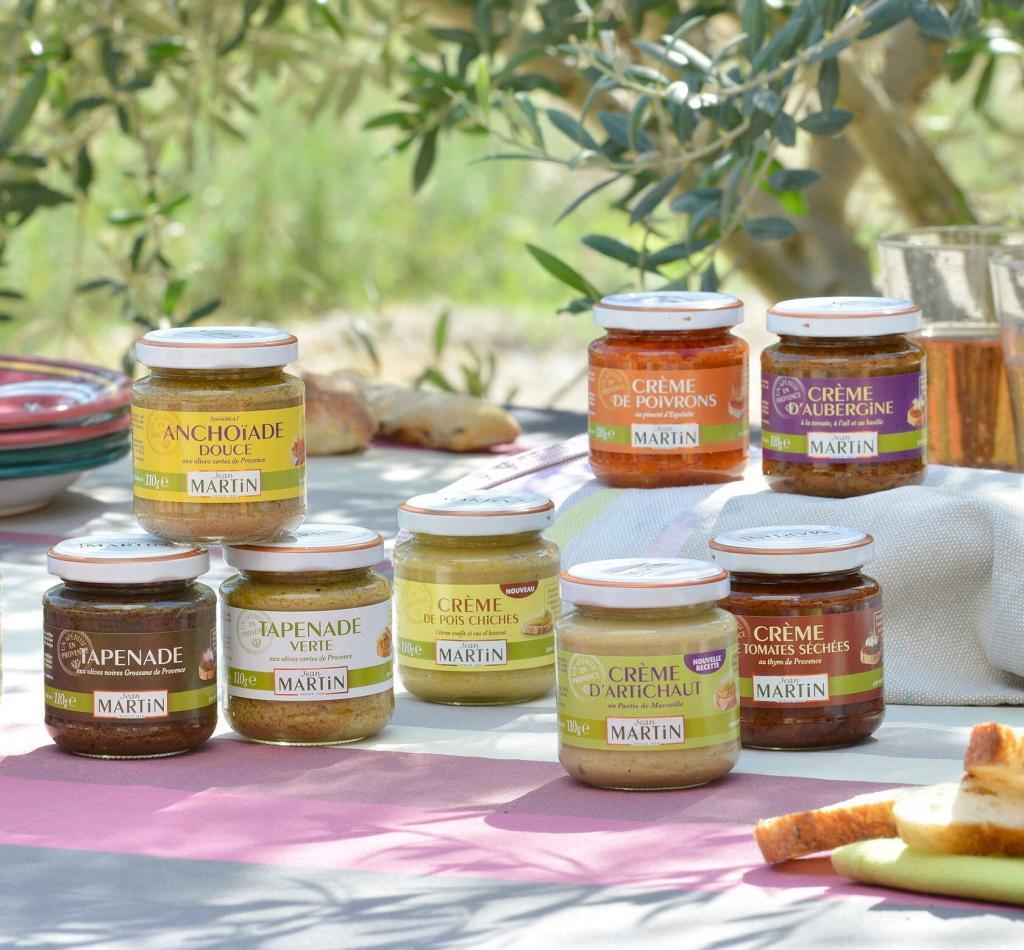 Headquarters for the Jean Martin company remains Maussane. However, the sales funnel stretches far beyond to customers in grocery stores throughout France (80% of the sales are in retail centres). The boutique in Maussane does a steady stream of business to locals and those from other European countries (Switzerland, Belgium) who are familiar with these high-quality products. 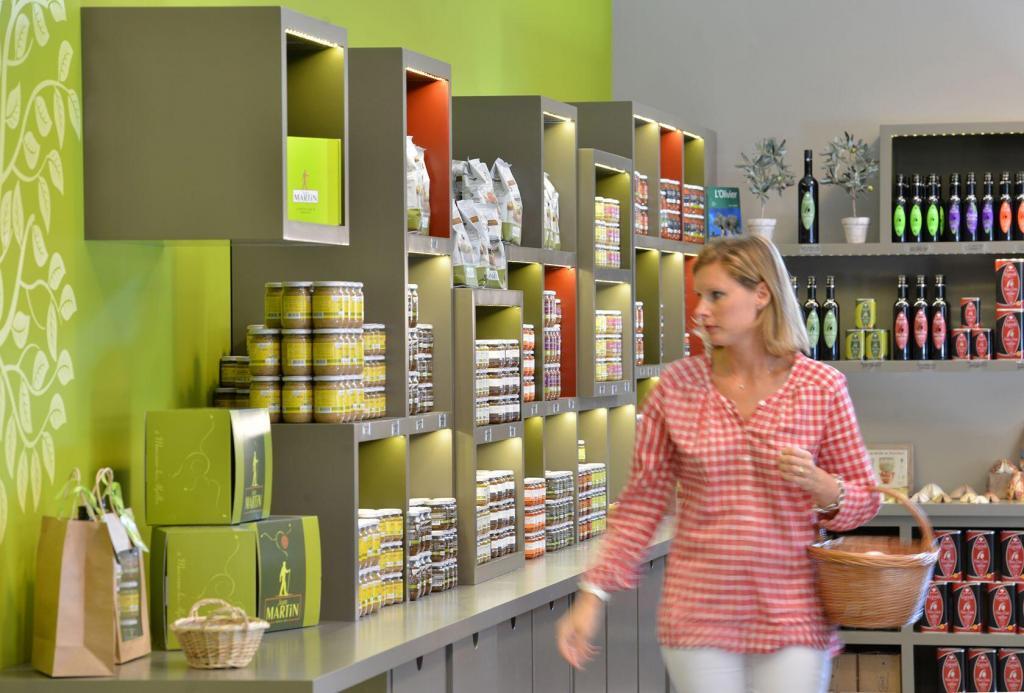 Investing in the long-term the company opened a new state-of-the-art production facility in Tarascon in 2009. Built to meet the highest standards for ISO, energy efficiency and organic certification the construction budget for the project was 5.5 million Euros. Since the factory opened, the company has been able to double its bottling and packaging capacity, and at the same time provide a much-improved ergonomic environment for the employees.

When the brothers took over the operations at Jean Martin, they added vegetable-based products influenced by traditional Provencal recipes. Their first product was a canned tabbouleh which at the time (1978) would have been slightly exotic for Provencal taste buds, but it’s hard to keep in stock today. They added a caviar d’aubergine conserve to their line in 1981 and the riste d’aubergine in 1988.

“The Jean Martin range of products has no artificial colouring or preservatives.” 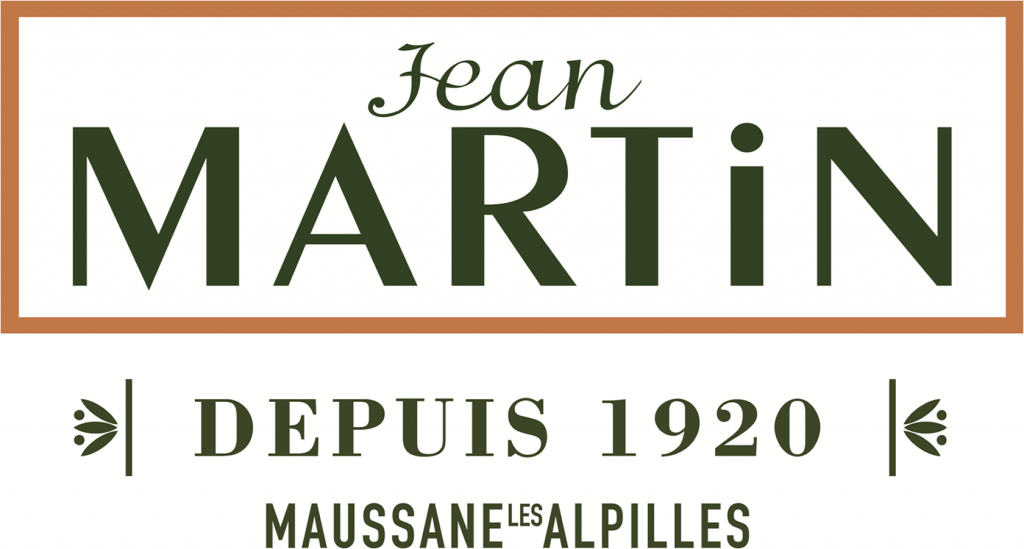 After testing and recipe experimentation, the organic line of products launched in 2010. At the time of writing, there are 57 different products in total, including 11 organic items. Several new products are launched each year after lengthy recipe development in collaboration with Chef Yvan Gilardi of Toquadom, taste testing and ingredients sourcing. 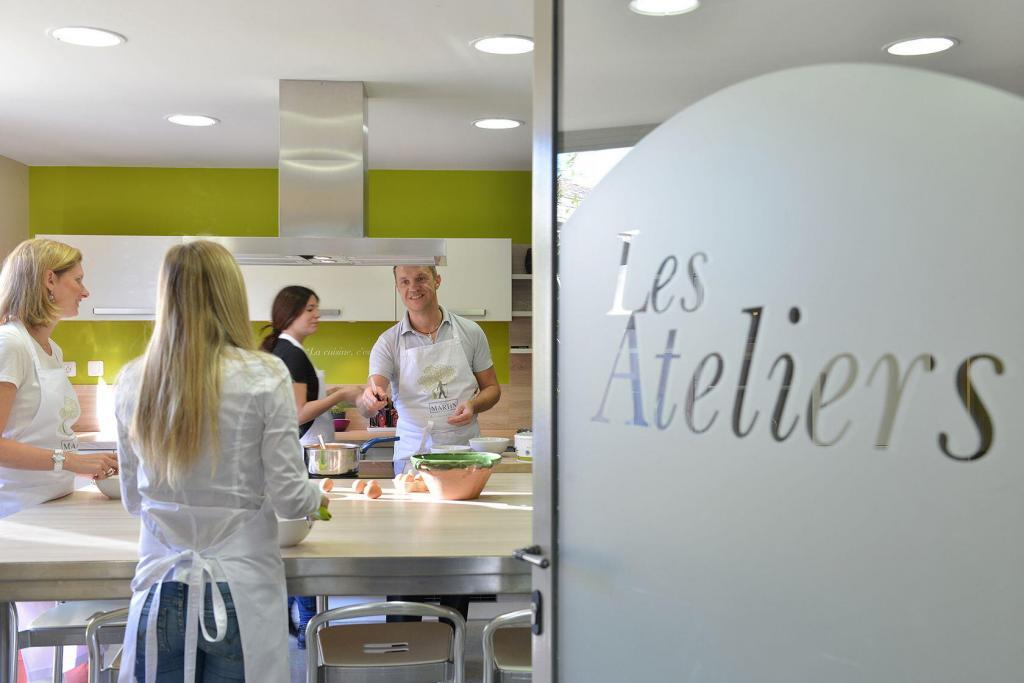 For all Jean Martin products, ingredients such as tomatoes, zucchini, eggplant are sourced locally in Provence, when practical. There is a stringent process to become a Jean Martin supplier. The internal quality control team evaluates a vegetable grower’s methodology and growing practices, including a detailed site inspection. The vegetables in question must meet exacting criteria, and the producer needs to be able to produce traceability documentation. These standards apply to suppliers of jars and packaging as well.

The olive remains at the core of the ingredient list for Jean Martin. The Appellations d’Origine Protégée (AOP) Salonenque olives, from the Les Baux Valley, are still used in the original Jean Martin recipe for olives cassé. The literal translation of “broken olives” does not do justice to this early season, green olive. It takes about five days for the olives to reach a consumable state. The olives are first tenderised by cracking the fruit, then subjected to an alkaline bath followed by clear water wash and finally spend a period in a brine bath of water, sea salt and fennel from the nearby hills. The heady perfume of the garrigue (scrub brush and wild herbs) from the Alpilles escapes when you open a jar of these olives.

Other olives varieties are used in many Jean Martin products including black and green tapenades, Gran’Draille (a black olive purée), olives confites, pissaladiere, and tomato sauces. Well, you get the picture, they need a lot of olives for the Jean Martin products. To ensure some control over their supply of olives the company entered a collaborative investment with le Domaine Castelas on 65 hectares (160 acres) of land near St Martin de Crau. In total 25,000 olive trees were planted, and the first harvest from “Les Aulnes” occurred in 2013.

According to the le Domaine Castelas website, this project was not for the faint of heart.

“This project was a huge challenge. The soil was an unknown quantity; the land, uncultivated. If you have never seen the Plateau de la Crau, you cannot imagine: very stony arid red soil in a desolate landscape where the rich flora and fauna fight a constant battle against the elements – the Mistral, the summer drought, and the teeth of flocks of sheep. Three inches below the surface of the soil is another difficulty: a veritable slab of natural cement.” Read the full article here.

Cooking for the Future

It was a warm, breezy afternoon in early September when I met with Bernard Martin, President of the company. He took some time to share his passion for the Jean Martin organisation and vision for the future. Both Martin brothers have been involved in the business since they were old enough to help with the annual olive harvest and gathering fennel. The fact that they are both involved in the operation today is hardly a surprise.

In the future look for new flavour combinations and sauces to suit changing tastes. These products are perfect for those concerned about quality ingredients and traditional flavours.

His favourite product? The riste d’aubergine. 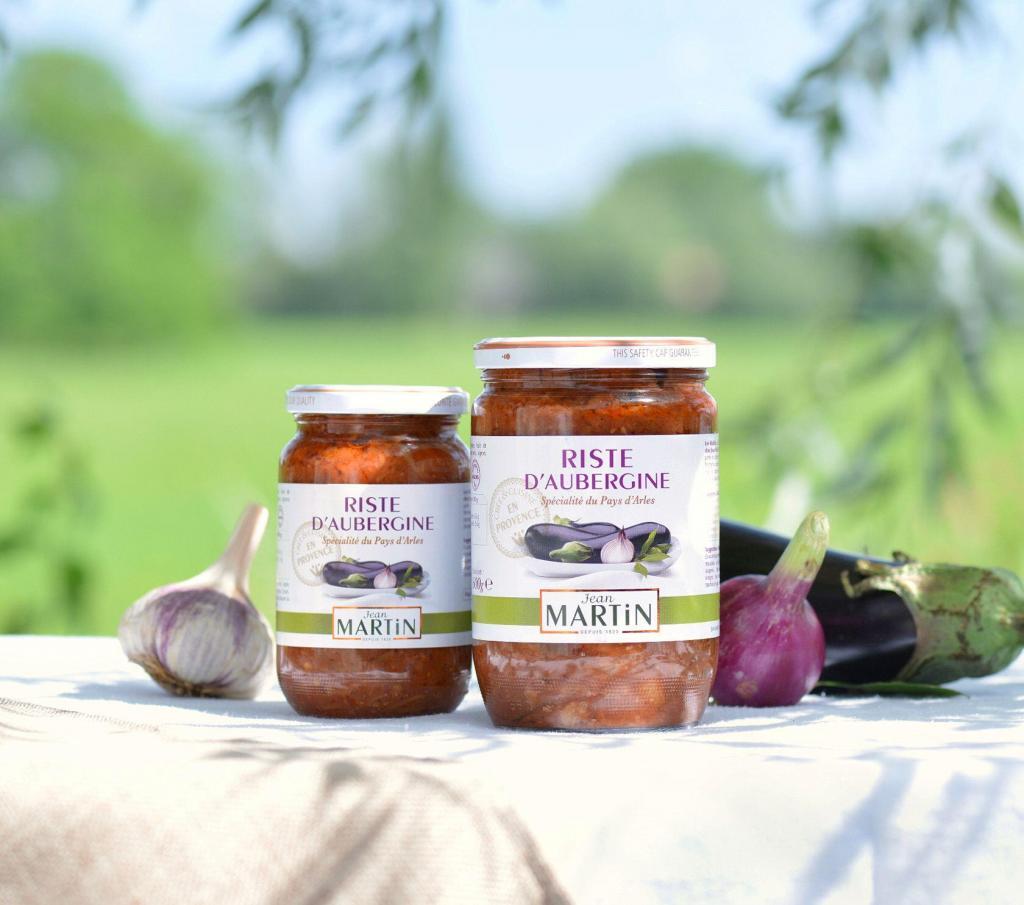 Try one of their cooking classes. Details here.

Read more about Chef Yvan Gilardi of Toquadom and his “chef at home” in Provence services here.

A dessert recipe from a Jean Martin cooking class – Roasted Apricots with Honey and Almonds.

Image credits: All photos were provided by and published with the permission of the Jean Martin company.