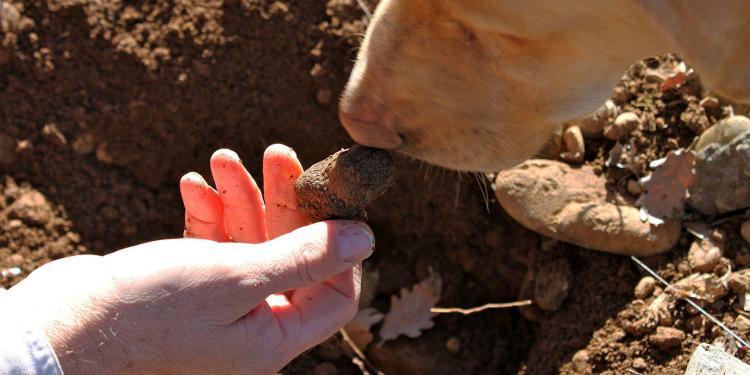 The dogs dart in and out of the trees, as the truffle hunter (caveur or rabassier) scans their movements watching to see where, and if, they start to dig. A single word, the command to stand down, the dog steps aside allowing his master to take over. Gently loosening the dirt, the farmer extracts what appeared to be a lump of coal, a black truffle the size of a toddler’s fist.

We had just witnessed a demonstration of how dogs are essential companions for the truffle hunt (le cavage). In most cases, dogs have usurped pigs as the more manageable truffle hunters. Hogs have an innate sense of smell, and they can reliably locate truffles but, the expensive issue is they like the taste of fungi. Alternatively, dogs require training to find truffles a lengthy process of dedicated, repetitive practice. However, the reward for all the drills is that a dog enjoys the hunt, the game of finding a truffle, but is not interested in eating the prize.

Searching for, and finding, Tuber Melanosporum (black truffles) requires a combination of well-trained animals and local’s knowledge of the terroir. Its rarity and distinctive earthy aroma make the black truffle the equivalent of culinary gold for many chefs. In France, the black diamond (diamant noir) has been considered a luxury gourmet ingredient since the 18th century, helped by the fact that King Francois 1er insisted that truffles be served in his court, at every meal. Today, the French black truffle harvest leads world production at roughly 45% of which 80% of the truffles come from the Vaucluse. The Périgord Noir is the same species of truffle named for the region where they are found in the southwest of France.

Our guide explained that black truffles have an interdependent relationship with a tree (often oak or hazelnut). The tree’s roots provide carbohydrates to the fungi spores and in exchange gather minerals. One of the clues that a specialist looks for is lack of vegetation around the base of a tree, where the ground appears dry and almost burnt. Truffles thrive in well-drained soil with a high limestone content and a neutral or slightly alkaline PH. However, it is only the critical eye that recognizes a truffle fly and follows its flight path. The flies lay their eggs in the soil above the truffles.

The typical period for harvesting black truffles in Europe is from November through early March. The market demand generally peaks around the Christmas and New Year’s holidays. Although, some food lovers claim that the tastier truffles appear in the first part of the year. Like any other commodity market pricing varies. Good quality truffles can command wholesale prices between 400-1000 €/kilogram, and retail buyers should expect to pay two or three times that number. With the prospect of those returns, it’s easy to understand why truffle hunters guard their supply locations a secret.

The white truffle (Tuber Magnatum Pico) is almost exclusively found near Alba, Italy. This fungi’s rarity impacts its market value significantly. In 2017, the top sales price for white truffles reached €88 per gram (almost 88,000 €/kilogram). These truffles are heavily aromatic, and their flesh is a light white-grey making them look like lumpy potatoes. Unlike the black varieties, the white truffle spore is yet to be recreated by agronomists – these truffles are created only by nature.

In recent years, it is quite common to see the summer truffle (Tuber Aestivum) in Provencal markets from May through October. Sometimes called the Burgundy truffle this variety is mild and only lightly scented and sells for about half of the price (200-500 €/kilogram) of a black winter truffle.

Richerenches is a quiet agricultural village, in the Vaucluse, complete with the elements you expect to see a stone church, a tree-lined main street, and a few shops. However, on the 3rd Sunday in January the town is anything but sleepy when crowds gather for the annual Messe aux truffes (Truffle Mass) in l’Église Saint Denis. Since 1952, this service honours Saint Antoine the patron saint of the trufficulteurs (truffle farmers). As an outsider, you can expect to stand outside the church stamping your feet to keep warm or squeeze into la Maison Templière where the mass simulcast on a big screen.

The church pews fill with members of the Confrérie du Diamant Noir et de la Gastronomie in their black tunic robes. This Brotherhood of the Knights of the Black Diamond was established in 1982 with the express mission to promote and protect the heritage of the black truffle. Instead of cash contributions, truffles are donated during the collection. The service ends with a lively parade through the village streets to city hall, where the highlight of the morning the truffle auction takes place. The auction’s proceeds are designated for the church. Food, drink and music follow the formal portion of the day, and local restaurants feature the black diamond as the star on their menus.

During the black truffle season, there are weekly markets in Richerenches on Saturdays, Carpentras on Fridays and Valréas on Wednesdays, and smaller markets in other villages throughout the week. Don’t get fooled by truffle oils and other products, unless they are from a reputable source. These oils can be flavoured with chemical concoctions. If you are buying a truffle, ask if you can touch it. A truffle should never be spongy, and it should smell like the earth.

Rabasse is the Provencal word for the truffle, although it is not common to see the word on a menu. During the season, many French chefs prepare themed meals featuring truffles. The price for these menus tends are elevated for what appears to be simple fare. However, the reality for serving truffles is to let the truffle be the king of the dish. Simple fare allows you to appreciate the natural flavour without overwhelming the mushroom. Classic recipes include scrambled eggs with shaved truffles; roast chicken finished with truffle, or a simple pasta with butter and parmesan topped with thin slices. The key to enhancing the flavour of a truffle is a bit of fat (butter or oil), a little heat, and a hint of salt.

“The most learned men have been questioned as to the nature of this tuber, and after two thousand years of argument and discussion their answer is the same as it was on the first day: we do not know. The truffles themselves have been interrogated, and have answered simply: eat us and praise the Lord.” — Alexandre Dumas

The Truffle Markets in Provence – Planning Your Visit and Recipes

Les Pastras
Organic Farm near Cadenet in the Luberon
They ship their truffles, and it is also possible to participate in a truffle hunt. Email: pepin@lespastras.com

Eat Lunch in Cagnes-sur-Mer at Le Kafé In