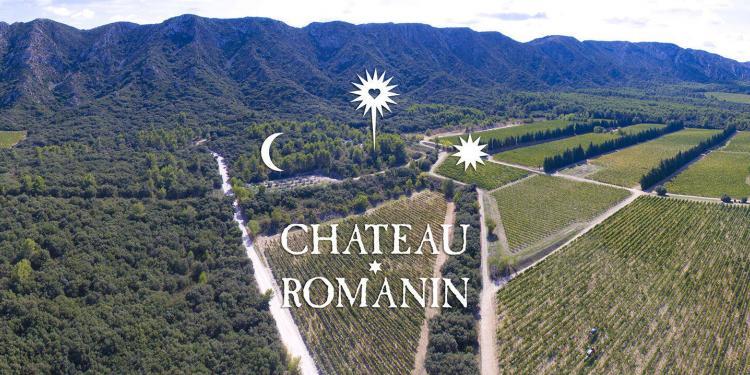 Occasionally, you catch a flash of the sun on the windows, a fleeting hint that something magical is taking place on the North side of the Alpilles. Initially, the meandering road that leads to Château Romanin parallels the Aéro-Club de Saint-Rémy les Alpilles glider runway. The striking backdrop of limestone fingers, the bluffs of the Alpilles mountain range, reaching skyward are the exact reason pilots love this location for their airborne pursuits.

A discrete sign indicates the direction to Château Romanin, the circuitous, unpaved route to the boutique and wine cave, which hug the base of these impressive cliffs. Chateau Romanin is a relatively new wine domaine, the biodynamic cultivation of grapes and olives began as a commercial operation, in 1988. The first bottled vintage (for public consumption) was 1990, and 1992 marked the start of construction for the wine cave and production facility.

When the sun reaches its apex on the summer and winter solstices, natural light streams down a circular stairwell and illuminates a bronze Templar star creating a magical glow in a mystical location. The symbolism is intentional.

The original owners selected a Gothic design for their subterranean wine operation, influenced by the centuries of history crisscrossing these hills. Glanum, in nearby St Remy de Provence, was occupied for between 4 and 6 hundred years by the Celtic-Ligurians, Greeks and Romans until 260 AD (read more here). The ancient Roman road (Ancienne Voie Aurelia – Via Domitia) that once connected Rome to Spain slices through the property and the remains of a Templar castle from the middle ages are still visible. The “ghosts” of ancient populations are harder to visualise, but the ruins from one of the sites of the medieval courts of love – the original Château Romanin – are apparent.

Architect and urban planner Serge Hennemann designed a building that was carved into the rocky ledges and then concealed with vegetation to reduce its visibility and impact on the natural surroundings. However, this is no tunnel on the side of a mountain Hennemann’s influences were both scientific (an astronomical observatory) and spiritual (terrestrial magnetism).

He created a “cathedral” dedicated to wine and a contemporary production facility. The wine ageing facility is a stunning visual juxtaposition of solid columns with Gothic arches rising three stories and flirting with the rocky hillside. Through a doorway are the stainless tanks and state-of-the-art winemaking technology that the current owners (since 2006) Anne-Marie and Jean-Louis Charmolüe insist upon for their winery, a “retirement’ project after they left the Bordeaux region to settle in Provence.

The vineyard was in feeble condition when they purchased the 250 hectares of land which includes vines (58 hectares), olives groves (4 hectares) and a significant number of almond trees. The owners continue to invest in Château Romanin with an annual vine replanting program that stretches years into the future, new equipment for vinification, an updated boutique and much more. The Charmolües are passionate about all aspects of the winemaking process. The property is organically certified, and the experienced team follows biodynamic principals.

The vineyard produces 45% red wines, 40% rosés and 15% whites. La Coeur de Romanin (the heart) is a red wine crafted only in exceptional harvest years. The vineyard namesake Château Romanin (red and rosé) and its partner La Chapelle (red) – both are AOP Les Baux de Provence wines – along with the Romanin blanc (IGP) are produced annually.  Le Mas de Romanin is considered the entry level wine, a vins de pays that is approachable, affordable and easy to drink.

As the gliders soar overhead cresting the peaks of the Alpilles, dancing on the coattails of a mistral blowing from the north, the grapes down below are shaking off any residual water from a recent rainstorm. The men on the ground and in the air are all expressing gratitude to this unique venue for the properties it delivers for their passions.

Image credits: All photos provided by and published with the permission of Château Romanin

Going to the Movies in St Remy de Provence