Eygalières the Alpilles Village You Want to Get to Know

Located on the northeastern edge of the Parc Naturel Régional des Alpilles, the hamlet of Eygalières has an official population of about 1,900 residents. However, in the summertime when second homeowners and short-stay visitors descend upon the village, the population swells well beyond the formal count.

The setting for Eygalières is idyllic. The hamlet has one dynamic main street surrounded by village houses and nourishment options. At the time of writing, there were three bar-cafés, one bakery, a butcher, an épicerie, an Italian-style deli, a decent assortment of restaurants and far too many real estate agents. Stroll up the road into the ancient village, and you get the sense that you stepped back in time. Over many years, the town’s elected officials maintained strict controls over the exterior design of homes and a tight rein on the number of building permits. If you get a chance to peek behind the old walls, it becomes clear that many restoration and upgrade projects have been completed to bring these homes up to modern standards.

In recent years, local tax dollars have gone towards municipal improvement schemes for vehicle and pedestrian circulation, which includes larger parking lots and better sidewalks. Although, the intent of these projects is well intended the result is a bit of a gentrified look, and some locals feel that the village is starting to look trop chic. Sport-minded residents are pleased with a brand new salles des sports and resurfaced tennis courts. L’Espace Vatelot is an attractive space located near the Marie for weddings, outdoor concerts and other creative events – it can accommodate 700 people outside.

Village with a Past

Vestiges of human habitation in the area have been traced to the late Bronze Age (1,500 -1,200 BC). The much-photographed Chapelle Sainte Sixte is located 1.5 kilometres from the village centre. The 12th-century chapel sits on a small rocky knoll with a 360-degree view of the Alpilles and Eygalières. It is believed that the church is situated near a Neolithic era place of worship, chosen for its proximity to a natural spring. The Romans tapped this same source for the beginning of their aqueduct system that supplied Arles with water for its public baths.

<< Eau, donne-nous la joie de la terre, éloigne la folie et garde la sagesse >>(Water, give us the joy of the earth, distance the folly and keep the wisdom) – Translated text from a Celtic-Liguarian stele discovered within the walls of the Hermitage.

Pope Adrian IV mentioned both Sainte Sixte and the village church Saint Laurent in 1155 as part of a larger religious circle that included the Abbey of Mollégès. On the first Tuesday after Easter Sunday, since 1222, residents carry the golden bust of Sainte Sixte from the old village church to this chapel. After the procession, a mass is conveyed to all those gathered, along with prayers for sufficient rain for the crops.

Due to its distance from the village, Sainte Sixte acted as a hospital and quarantine site during the Plague. During the 16th-century sleeping quarters, a small hermitage, and walled kitchen garden were added for the monk in residence.

The old village of Eygalières, part of which is now in ruins, sheltered the families of farmers and shepherds as far back as the 7th-century. Surrounded initially by formidable stone ramparts that were patrolled by guards, the town’s hilltop position would have been critical for defence purposes. You need to know where to look, but it is possible to see some of the slots in the walls for artillery fire – bouches à feu. The former buildings included a chateau and its dungeon, a hospital, a church, a chapel and the old town hall (marie). Today, the far-reaching vistas of the Alpilles and Mont Ventoux in the distance are stunning and well worth the climb to the top of the rocky outcrop.

Walk along the principal street (Rue du Docteur Roque) passed the onetime marketplace — Place Pago Tard — it is now frequently used for open-air concerts and art displays. At the far end of the road is the Porte de l’Auro, the Provencal name for one of the northern winds. Today, the opening between the old stone walls is broad enough to drive through. Just outside this same gate is a stone windmill (1711), one of several that operated around the village for milling grain and olive oil. There is another mill on the far east side of the old town, the Moulin St Marc, which is in decent condition, although not operational. If your visit is on a weekend afternoon, stop by the small museum in Chapelle des Pénitents Blancs (17th century). The display space is filled with artefacts and archival information from the town’s past.

There are frequent art exhibitions in the original Eglise St Laurent and the newly restored Maison des Consuls. During peak season, these displays are usually open in the afternoons, but the hours are limited.

The annual celebration honouring Saint Laurent the patron saint of the 12th-century church – Fête de la St Laurent – is centred around August 10th. At this time of the year when the already lively village seriously ‘lets its’ hair down.’ The cafes expand their square footage to create larger bars. It’s time for a party and bulls and horses in the streets. 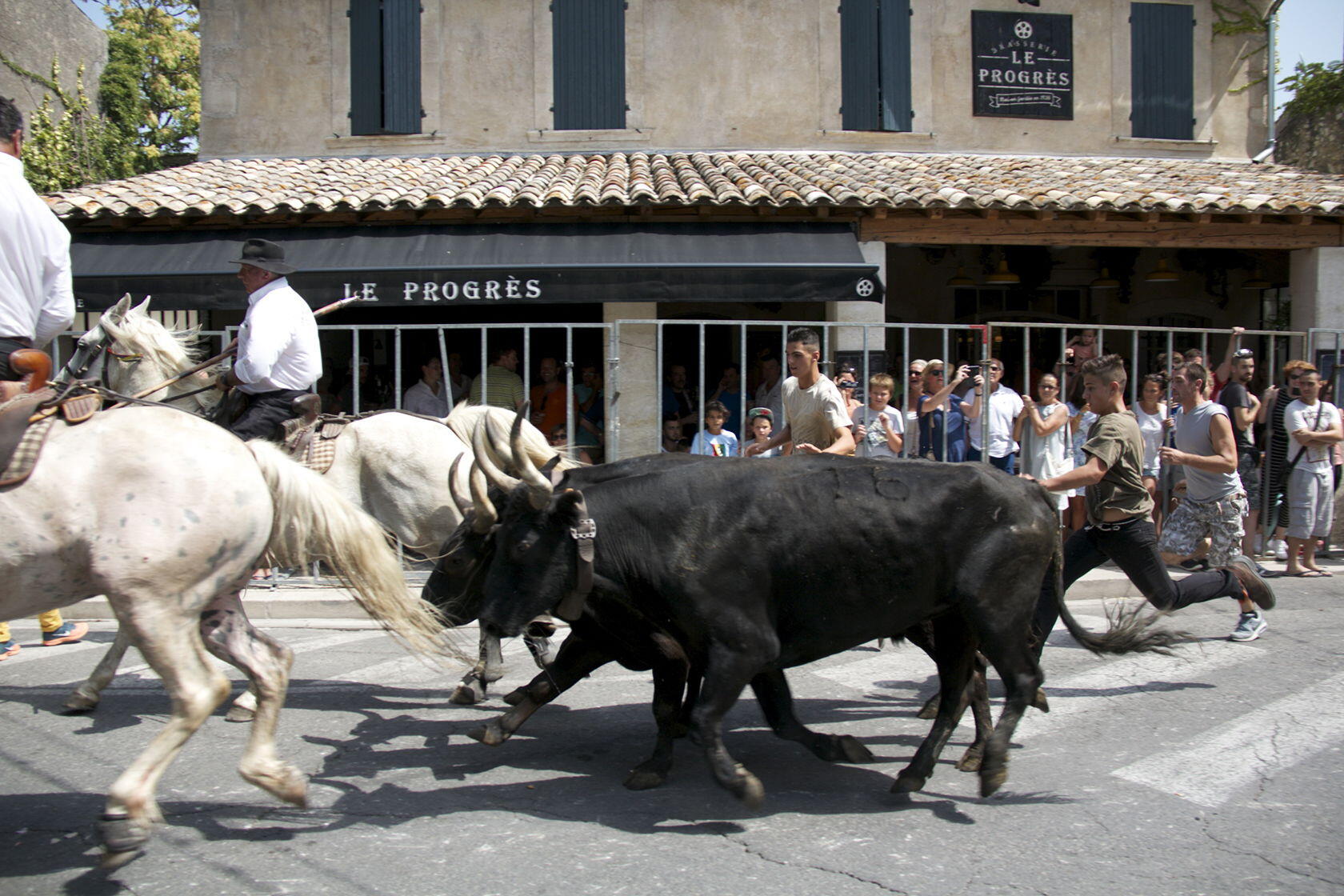 There is something for everyone:

Music: During the festival, entertainment starts late morning and runs well into the wee hours. If you live in or near the village, it feels like the bands are playing your bedroom.

Cowboys and cowgirls: Spectator events surround the iconic white horses and black bulls, these trails are well worth watching for the expert horsemanship of the teams of guardians (cowboys) who corral the taureaux (bulls).

Games: The “Fête” is not just for adults there are rides and carnival games for the little kids, and even a riding demonstration with child riders.

Food: It wouldn’t be France without some dining opportunities. Throughout the program, there are traditional meals such as; sardinade, moules frites, Provencal aioli (recipe here) and soup à l’onion. It’s a week that ends with truckloads of empty bottles of pastis, beer and rosé.

The weekly market is on Friday mornings