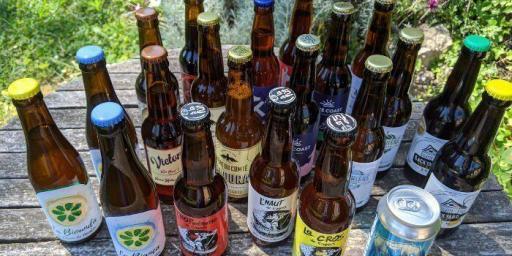 It’s Friday evening apéro time, and I’m trying to decide which beer to drink for my apéritif. Despite being in lockdown, or in fact strangely, thanks to being in lockdown, I have an unusually large and varied selection of craft beers from French Riviera independent breweries to choose from. This is because we’ve just taken delivery of a tasting box of 24 different beers put together to help local microbreweries during these exceptional and difficult times.

Continue reading here for the original thirst-quenching article by Phoebe at Lou Messugo.

If you are visiting the French Riviera and feel like a cold, local brew, here are a few choices.

Backyard Brews
23 traverse du Barri
06560 Valbonne – Sophia Antipolis just outside of Nice.
Nicolas and Yoann both developed their taste for “American-style” IPA and Pale Ales in North America. Discover their standard craft beers as well as a seasonal collection.

Head to Beer School. As Phoebe mentions in her article, École de la Bière in Nice is an educational collaboration between Brasserie BLEUE and Allez Hops! (beer store).

La Mentounasc
Brassarìa Artisanarìa
83 Boulevard de Garavan
06500 Menton
Owners Alexis and Rémi are long-term friends and beer lovers. They create a line of craft beers that reflect the Menton’s location on the Côte d’Azur and pay tribute to the iconic locally grown lemon. These citrus-flavoured beers have no artificial preservatives.

La Géante de Provence is a new microbrewery located in the perched village of Brantes. Naming the beer might have been the easy part of a process that has taken the co-owners Rory White and Pascale Merlette-Lagarde well over two years of talking, planning, ordering, and finally, brewing. Read more here.

Phoebe Thomas carries two passports British and Australian. She married a Frenchman and now the couple are living in Provence with their two children. This bilingual and multi-cultural family has travelled extensively to Asia, Eastern Europe and Australia before settling in Roquefort les Pins in 2007.

Read more about Lou Messugo the Cote d'Azur holiday home rental owned and managed by Phoebe and her husband here.